The Dangers of “As Quiet As It’s Kept”

Clinical Impact Statement: This manuscript provides essential information to mental health clinicians, clinicians in training, and those who educate and train them. It is intended to assist them in better meeting the mental health needs of African-Americans who are re-adjusting to their native culture. Specifically, this document provides assistance in understanding cognitive behavior therapy tools that promote healing and black psychology.

“As quiet as it’s kept” is a phrase packed with resiliency, pain, and generational trauma. I first heard this phrase when I was about 5 years old. The phrase lacked a visible impact on my life until my late teens. In my family and other families in the South, I heard this phrase used to cover up or lessen a trauma that they themselves had experienced or someone else in the family. In many ways, I was complacent to this cultural norm and carried the “as quiet as it’s kept” mantra all the way with me to Peace Corps as a Youth Development Volunteer in Ukraine.

Unfortunately, in Ukraine “as quiet as it’s kept” no longer served me or protected my traumas. It actually hindered me from trauma recovery. In order for AAs [African-Americans] to recover from traumatic wounds inflicted by White racism, they need to develop a sense of security and comfort with their Blackness (Danzer, 2012). I believe that Blackness is defined by the person who identifies as Black. I view my Blackness as being unapologetic while existing in predominantly White spaces, in addition to demanding that I receive as much equal attention and respect as my White counterparts.

Often times in Ukraine I felt unheard, disrespected, small, and on display. Mainly because Ukraine is a homogenous culture; the population primarily consists of individuals with Caucasian, Christian, cisgender, able-bodied, and heterosexual backgrounds. Those who do not fit within the parameters of the homogenous norms receive another kind of treatment. If social expectations are not met and if the social norm is important, deviation leads to loss of social status or exclusion (Schachter, 1951). In Ukraine, I felt excluded from areas of the culture that I was not allowed to access, and at other times I felt like the main attraction at a circus show. In many ways, I either felt excluded or overly included.

Confronting my Blackness led to many other revelations in my life. In identifying health risk and protective (resilience) factors, it is not only important to consider an individual’s current life circumstances and recent events, but to take into account past traumatic experiences (Bombay, Matheson, & Anisman, 2009). Life taught me to be resilient in order to survive. In doing so, I neglected my mental health and my physical health. In recovering from trauma as a child and as an adult in Ukraine, I utilized “resiliency” as tactic instead of a tool. This means I learned to view resiliency as an ability to overcome obstacles with the aid of effective coping mechanisms to manage the symptoms of trauma. Peace Corps Ukraine constantly reiterated the importance of being flexible and resilient throughout one’s service.

I, along with other Peace Corps volunteers, view being told to be resilient as a way to not acknowledge the hurt and only keep the pain inside of oneself. As a child I was taught “quiet as it’s kept” and I carried throughout my life. When I went to Peace Corps Ukraine, “quiet as it’s kept” was rebranded into “resiliency.” The late Maya Angelou hypothesized that:

Currently I do have the ability to fully ascertain that the words most Ukrainians used towards me were said out of ignorance or to cause harm. Either way, being called a “Nigger” or a “monkey,” told to get out of Ukraine, and other things affected me. It reshaped how I viewed how the world viewed me. It made me angry and eventually assertive. I slowly began to despise the phrase “quiet as it’s kept.” In Ukraine, I read books by James Baldwin, Maya Angelou, and Toni Morrison in addition to speaking to the elders in my family; this gave me the strength and permission to speak my truth.

In preparation for readjusting to the culture in the United States of America (U.S.A.), I found research and tools that are specific to veterans. Families can provide companionship and a sense of belonging, which can help counter feelings of separateness and difference from other people. They can provide practical and emotional support for coping with life stressors (“A Readjustment Handbook,” n.d). Returning to the U.S.A., I was confronted by the person I was before Peace Corps. In Ukraine, I learned that in order to be heard I needed to be assertive, listen, set boundaries, and be consistent.

Before departing for Ukraine, I believe that I was assertive, set boundaries, and was consistent with everyone in my life except my family. I tend to choose the passive aggressive approach to conflict when interacting with my family. I knew that behavior was not healthy and was dishonest. Passivity became a survival skill with family members. In Ukraine my friends and community members became my family. Passivity did not serve me in those relationships.

Although I still possess a few passive qualities, I am more assertive and listen more when conflict arises in my family systems. Since being back in the U.S.A. I have reconciled relationships with my aunt and my step-mother; over 28 years of hurt has now been addressed. I feel free and well because of it. I am fully accepting this more truthful version of myself. One conversation at a time, I am redefining “quiet as it’s kept,” casting it aside for more honest conversations with family members that will lead to generational healing.

A readjustment handbook: A guide to understanding and coping with readjustment issues following a military deployment. (n.d.). Retrieved from http://anyflip.com/dkfg/hrsv/basic/mobile/files/basic-html/index.html

Danzer, G. (2012). African-Americans’ historical trauma: Manifestations in and outside of therapy. Journal of Theory Construction & Testing, 16(1), 16-21. 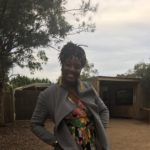