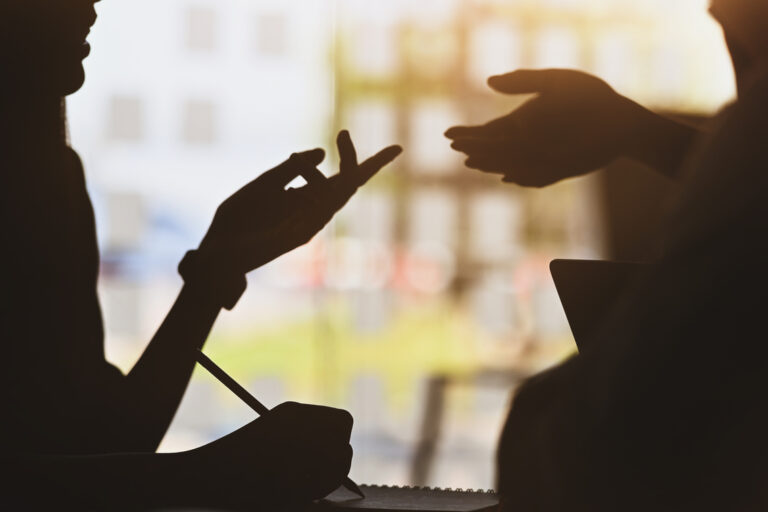 This article is the second of a two part series. The first article (Mahon et al., 2021) can be found here.

The purpose of this paper is to explore the relationship between alliance measures and improvement on the outcome measure for clients in longer term treatment (six to 20 sessions). This is the second of a two part series. The first article (Mahon et al., 2021) explored the relationship between alliance scores and improvement on the outcome measure for therapy lasting five sessions or less (56% of the sample available). While we extended the findings from previous meta-analysis (Flückiger et al., 2018) with a larger dataset, less is known about the alliance-outcome association in later sessions. For example, Baier et al. (2020) in their systematic review suggest that the alliance may be more important early on in treatment, as later sessions could be less likely to experience ruptures. If the alliance outcome association proves to follow different patterns at later stages of therapy than our previous findings, this will be important for practitioners to understand as it may highlight different junctures where the alliance needs more or less focus by clinicians .

Thus, this paper investigates the relationship between alliance scores, session by session change, and final outcome, for clients receiving over five sessions using data from the ACORN collaboration database (Brown et al., 2015a; Brown et al., 2015b). Specifically, we explore how the relationship between alliance scores and outcome may change depending on the length of treatment, six to 10 sessions, and 11 to 20 sessions.

This study utilizes a suite of questionnaires developed within the ACORN collaboration (Brown et al, 2015a). The first article in this series (Mahon et al., 2021) provides a more comprehensive description of the questionnaires employed.

All items use a 5-point Likert scale. The questionnaire subscales are scored as the mean of the non-missing items resulting in a range of 0-4. Higher scores indicate greater disturbance in the alliance.

The following analyses are based on the subsample completing treatment within five sessions. Results for longer lengths of treatment will be addressed in subsequent articles.

The alliance is notable in that it does not begin to approach a normal distribution, with scores heavily skewed towards a positive rating of alliance. At all sessions more than 75% rated the Alliance as highly as possible on the scale of 0-4, with 0 indicating no concerns re-alliance (perfect alliance). Likewise, mean session to session change is quite small.

Table 4 presents Global Distress Scale (GDS) effect size from session to sessions as well as from the start of treatment as a function of direction of alliance change from the prior session.

Table 5 presents the results of an analysis of variance (general linear model) evaluating the effect size based on the change in alliance since the start of treatment (better, same, worse).  At each of the session ranges, a negative change in alliance was associated with a significantly lower effect size at that point in treatment. While the comparison failed to reach a significance level of p<.05, there was still a strong trend (p<.1), The failure to reach a higher level of significance is likely due to the shrinking sample sizes at latter sessions.

Correlation Between Mean Alliance Scores and Change on Outcome Measure 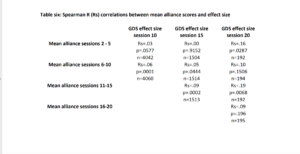 For clinicians, the implications of these results suggest that they should continue to collect alliance measures throughout the entire treatment episode.  Despite good alliance and rapport early on in treatment, the clinician cannot assume it will remain the high throughout treatment.    Consequently, it is important to track rapport throughout the relationship as it can help address any disruptions or changes which can lead to improved outcomes.

Brown, G. S. J., Simon, A., & Minami, T. (2015b). Are you any good…as a clinician? [Web article]. Retrieved from http://www.societyforpsychotherapy.org/are-you-anygood-as-a-clinician

The Importance of the Therapeutic Alliance in Short Term Therapy 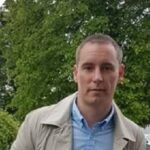 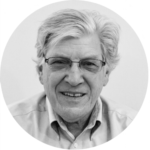 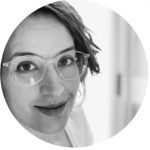